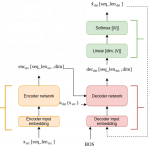 “Annotation (via crowd-sourcing and other methods) tends to be more straightforward when explicit instances of abusive language can be identified and agreed upon, but is considerably more difficult when implicit abuse is considered. […] Furthermore, while some argue that detailed guidelines can help annotators to make more subtle distinctions, others find that they do not improve the reliability of non-expert classifications”.

Besides, more subtle abusive comments may be easier to rephrase since crude (and easy to detect) toxicity often involves identity-based attacks, obscenity or insults that are the main content of the comment. As proposed by The challenge of identifying subtle forms of toxicity online, a system suggesting automatic rewordings of “detoxifiable” comments could nudge healthier conversations at scale.

The difficulty of getting accurate labeled comments containing passive toxicity and our interest in a general AI detoxification model motivates the exploration of Unsupervised Text Style Transfer. As stunning results in style transfer came first from Computer Vision research, we introduced some milestones achieved in Image-to-Image translation research in this article.

Examples of Sequence to Sequence tasks for text include machine translation, text style transfer, abstraction-based summarization and conversational systems. In this article we’ll focus on models based on unsupervised learning tricks as we saw earlier that annotating parallel text sequences for “detoxification” was difficult and costly.

Unsupervised Machine Translation has made significant progress recently at the instigation of work from Facebook AI Research. If you want a mor detailed chronological wrap up of their research, please refer to the Facebook blog post Unsupervised machine translation: A novel approach to provide fast, accurate translations for more languages (Marc’Aurelio Ranzato et al.).

Learning rotations on sets of word embeddings in different languages aligns representations of the same words in each language. Figures from Ranzato et al.

Illustration of the three principles of unsupervised machine translation. A) There are two monolingual datasets B) Initialization aligns the representation of similar tokens in both languages C) Language modeling increases the fluency of the generated translated sentences D) Back-translation allows training the system in an fully unsupervised way since there is no labeled parallel sequences. Figure from Lample et al. (2018b).

There are different ways of implementing these principles. We’ll focus on the neural Encoder-Decoder architecture described in Lample et al. (2018b).

A Neural Encoder-Decoder is made of an encoder module and a decoder module and a token generation module. The encoder and the decoder are often based on the same network or the same network class. The initialization step is implemented by learnt embedding matrices that produce the word embeddings at the input of the encoder and decoder modules. The embedding lookup matrix can be shared by the encoder and the decoder or not. When generating a translation at inference time or a pseudo-translation at training time, the decoder takes as input the representation output of the encoder, a Beginning of Sentence token, the attribute (language, style, etc…) of the destination and tokens already generated at the time step. The straightforward implementation of the generator module is a linear layer followed by a softmax function that will be used to sample generated tokens. 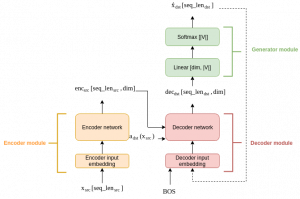 Architecture of the Encoder-Decoder Sequence to Sequence model (at inference time).

Now that we saw the architecture of the Sequence to Sequence model at inference time, how can we use the three principles of unsupervised machine translation to train the model?

where C is the noise applied to input sentences and asrc(x) is the language of the input sentence x (pseudo-translation is not performed when training the Language Model; the destination language is the source language).

Traning the Encoder-Decoder Sequence to Sequence model as a denoising auto-encoder.

Traning the Encoder-Decoder Sequence to Sequence model with back-translation.

Finally, the total loss to minimize is LLM+λLBT.

Wait a minute, how can we backpropagate the error though the entire pipeline if the sampling operation generating the pseudo-translation tokens (based on the probability distribution produced by the softmax layer) is not differentiable? While Lample et al. (2018b) just froze the weights of the Encoder-Decoder during the pseudo-translation for “simplicity and because [they] did not observe improvements when doing so”, Christos Baziotis et al. described in SEQ3 : Differentiable Sequence-to-Sequence-to-Sequence Autoencoder for Unsupervised Abstractive Sentence Compression an approach to workaround the non differentiability of sampling during back translation. We extend the non differentiability of sampling in this article.

Allright, we saw the general architecture, the training procedure, but which models to use for the encoder and the decoder? Lample et al. (2018b) used LSTMs and transformer cells but later, Lample et al. introduced in Cross-lingual Language Model Pretraining (2019a) a network entirely based on the transformer architecture and a training procedure inspired from the Masked Language Modeling described by Jacob Devlin et al. in BERT: Pre-training of Deep Bidirectional Transformers for Language Understanding.

If you’re not familiar with how Attention Is All You Need leveraged attention mechanisms to build the Transformer, I would recommand to take a look at The Annotated Transformer. Compared to recurrent neural networks, transformers capture longer-term dependency which proved working well on Natural Language Understanding (BERT, XLNet) and Natural Language Generation (GPT-2).

Text Style Transfer with unparallel data has been approached with various methods, you can find an exhaustive list of research papers since 2017 here.

In 2017, Zhiting Hu et al. and Tianxiao Shen et al. based their models on disentangled latent representations and established first results in Text Style Transfer. Examples below show sentiment style transfer applied to short sentences with some loss of meaning or fluency:

The only application of style transfer for detoxication of abusive comments to our knowledge is Fighting Offensive Language on Social Media with Unsupervised Text Style Transfer (Cicero Nogueira dos Santos et al., 2018). Despite giving a first try at paraphrasing offensive messages, this work states that “current unsupervised text style transfer approaches can only handle well cases where the offensive language problem is lexical […]. The models experimented in this work will not be effective in cases of implicit bias where ordinarily inoffensive words are used offensively.”; this conclusion motivates for deeper research to capture sublte forms of toxicity.

Here ends our tour of Unsupervised Style Transfer. We don’t claim to have covered all of the most promising technics, for instance Reinforcement Learning and GANs for text arouse ongoing interest and are especially relevant for controled text generation. Looking at the growing interest in Text Style Transfer, things are moving fast, so models we presented might be outdated soon. Anyway, diving into this community and studying how AI and NLP methods can help fighting against offensive behaviors online is particularly thrilling.